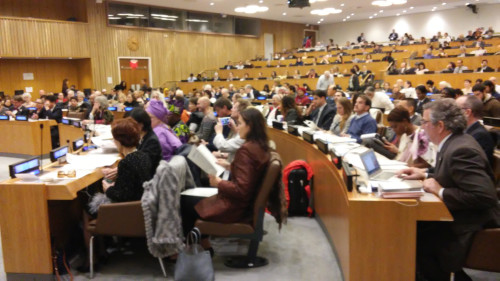 On February 3, 2016 over 600 UN delegates and NGO personnel gathered on the United Nations campus for the event “Interfaith Harmony: Implementing the Transformative Agenda of the Sustainable Development Goals”.  The program listed The Interspiritual Network, as representing, and participating in the procession, of seventeen global spiritual and religious paths.  Dr. Kurt Johnson filled with role for the Network; his UN Committee, the Committee on Spirituality, Values and Global Affairs was one of seven co-sponsors along with the UN’s primary sponsor, the UN Committee of Religioius NGO’s.

The three-hour program was a who’s who of UN delegates and NGO representatives active across the UN’s many initiatives, especially the Sustainable Development Goals (SDG’s).  Each of the 17 spiritual paths held a banner for one of the 17 SDG’s.  Among many, the President of the UN General Assembly (which declared World Interfaith Harmony Week), and also Pope Francis (by video) addressed the event.  The Executive Director of the United Religions Initiative (on whose board Interspiritual Network committee-person Ed Bastian also sits) was also one of the speakers.  This was a truly inspiring even and witness to the role of the Interspiritual Networking in promulgating the interspiritual vision within the wider world interfaith movement.

Hot Off the Press!